Principal Employer should include Sub-contractor in their RC under CLRA

I feel extreme pleasure to share with you a note on – requirement of mentioning sub-contractors name other details  in Form II &  issue of Form V by Principal Employer also clarifying  applicability of Contract Labour (Regulation & Abolition) Act, 1970 to Sub Contractors & sub-sub contractors.

Section 12 sub-section (1) then proceeds to enact that with effect from such date as the appropriate Government may, by notification in the official Gazette, appoint, no contractor to whom this Act applies, shall undertake or execute any work through contract labour except under and in accordance with a ‘licence issued in that behalf by the licensing officer. It is therefore clear that not only a contractor but also a sub-contractor who comes within the definition of the term 'contractor' in section 2 clause (c) is bound to obtain a licence under section 12 sub-section (1) before contractor or sub-contractor can undertake or execute any work through contract labour.

Thus incase where sub- contractors, have-not cared to obtain such licence and yet they have undertaken and are executing any  portions of the of work entrusted to them by the contractors, through work men employed by them either directly through contractor (or sub contractor) . This is clearly in violation of the prohibition enacted in section 12 subsection (1).

In fact, if sub- contractors undertake or execute any work through contract labour without obtaining a licence under section 12 sub- section (1), they would be guilty of a criminal offence punishable under section 23 deals with the provisions of contravention regarding employment of contract labour and Sections 24 and 25 are the penal provisions with regard to the offences contemplated under the Act.

The Principal Employer needs to mention in Form II names of all subcontractors with the number of people deployed or not.

As per the above detail where I had explained you that sub contractor is also a contractor (read section 2(c ). This part of the definition is lucid. However, the words “and include a sub-contractor” throws us into an infinite loop.
The term contractor therefore includes the term sub-contractor. Therefore, every sub-contractor is a contractor. Neither the Contract Labour Act nor the rules made pursuant thereto describe or define the sub-contractor.
Section 12 that deals with licensing of contractors prohibits any contractor from employing contract labour without a license to do so.
As per the Rule 18 provides for Form II of the certificate of registration to be granted under Section 7 [2] of the Act. The certificate of registration has to contain
[i] the name and address of the establishment,
[ii] the maximum number of workmen to be employed as contract labour in the establishment,
[iii] the type of business, trade, industry, manufacture or occupation which is carried on in the establishment,
[iv] the names and addresses of contractors,
[v] nature of work in which contract labour is employed or is to be employed and
[vi] other particulars relevant to the employment of contract labour
Also read with Rules 21 (2), every application for the grant of a license shall be accompanied by a certificate by the principal employer in Form V to the effect that the contractor has been employed by him as such in relation to his establishment.

The principal employer further undertakes to be bound by all the provisions of the Act and the rules made thereunder in so far as the provisions are applicable to him in respect of the employment of contract labour by the contractor.

I trust that this will secure your appeal regarding Principal Employer liability to provide Form V to sub contractor.

Adding to this, I would also like to inform you that in absence of valid contract labour license
As per Section 12 - Licensing of contractors: No Contractor shall undertake or execute any work through contract labour except license issued by licensing officer.
So, I would like inform you that in the absence of a valid license, a contract workman would be deemed to be the workman engaged directly by the principal employer.
In this regard I am supported by the verdict on case of  P&H HC: Chet Ram Vs. PO Labour Court Faridabad 2011

Whether to Pay Double Wages or Comp Off If employees work on National Holiday ?

Independance Day and Other National Holidays - Whether to Pay Double Wages or Comp Off ?

This is always asked and debated as what Salary to be paid if the employees of an organisation are called to work on a National Holiday like Independance Day or Republic Day.

To simplify things, here is the clarification :- 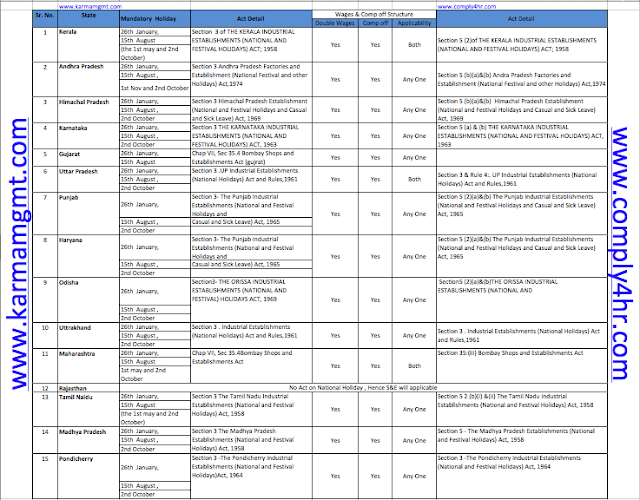 For Festival Holidays PAN India, it is always Double the Wages OR a COMP OFF in lieu of double the wages

In a quick fix solution to the ongoing debate over the “Inspector Raj” issue, the Ministry of Labour and Employment has decided to replace the term “inspector” with the term “facilitator” in a proposed legislation on wages.
In its draft Labour Code on Wages Bill, 2015, which will replace four central statutes on wages — the Minimum Wages Act, 1948, the Payment of Wages Act, 1936, the Payment of Bonus Act, 1965 and the Equal Remuneration Act, 1976 — the labour ministry has decided to use the term “facilitator” for the person who will “supply information and advice to employers and workers concerning the most effective means of complying with the provisions of the code”.
According to the draft Bill, the facilitator will also “inspect the establishment” within the local limits assigned to him.
This is the first time that the ministry is using the term facilitator. Earlier, in amendments to the Employees’ State Insurance Act in 2010, the ministry had redesignated inspectors as “social security officers”.
“The objective is to project a more friendly image to employers. The facilitator’s functions and powers are also proposed to be in keeping with this image,” said a person close to the development, pointing out that the labour ministry has been rolling out initiatives over the last one year that are aimed at being more business friendly.
While the facilitator retains the labour inspector’s power to examine workers, search and seize copies of relevant documents, the ministry, in a significant softening of stand, has proposed that instead of taking action against defaulting employers straight away, facilitators will give them a chance to comply with the provisions of the code.
“The facilitator shall, before initiation of prosecution proceedings, give an opportunity to the employer to comply with the provisions of this code by way of a written direction, which shall lay down a time period for such compliance, and if the employer complies with the direction within such period, the facilitator shall not initiate such prosecution proceedings,” says the draft Bill.
“It’s a very good provision… defaulters will be given a chance to first comply with the law and not be prosecuted straight away,” said Michael Dias, secretary of the Employers’ Association in Delhi.
The facilitators will use the centralised web-based inspection system launched by the labour ministry last year instead of going for frequent checks and inspections.


Keen to table the proposed Bill in Parliament by the end of the Budget Session, Labour Minister Bandaru Dattatreya has held two rounds of tripartite meetings with employer and employee representatives as well as state labour departments. The ministry has also sought public comments on the Bill by April 20.
No comments:

How to get an exemption under EDLI (Employees Deposit Linked Insurance Scheme, 1976) under PF Act

Section 17 (2A) of the Act provides for grant of exemption from the operation of Employees Deposit Linked Insurance Scheme, 1976.  It is granted to an establishment, where the employees are, without making any separate contribution or payment of premium, in enjoyment of benefits in the nature of Life Insurance whether linked to their deposits in Provident Fund or not and such benefits are more favourable than the benefits admissible under the Insurance Scheme.  It is granted by the Central Provident Fund Commissioner by notification in the official gazette and is subject to conditions that may be specified in the notification.  It is  granted either prospectively or retrospectively.

Pending grant of exemption to an establishment relaxation order may be issued under Para – 28 (7) of the Employees Deposit Linked Insurance Scheme, 1976.

An establishment exempted from the operation of Employees’ Deposit Linked Insurance Scheme, 1976 is required to submit a monthly return to the Regional Provident Fund Commissioner by the 25th of the month in Form 7(IF).

Para 28 (4) of the Scheme provides for grant of exemption by the Central Provident Fund Commissioner to any Class of employees.

STEPS TO INTRODUCE THE SCHEME:


The establishment shall pay inspection charges at the rate of 0.005 % of the basic wages and Dearness Allowance subject to a minimum of Rs.1/- per month.

Compliance of Annual Report to be filed under Sexual Harassment of women at workplace (prevention, Prohibition, and Redressal) Act, 2013

Annual Report is to be filed with LCC and District Officer.  Please check the format of Annual Report to be filed under Sexual Harassment of women at workplace (prevention, Prohibition, and Redressal) Act, 2013

Re: Annual Return under Sexual Harassment of women at workplace (prevention, Prohibition, and Redressal) Act, 2013 for the year ended December 2014

We enclosed herewith the Annual Return (All India) under Sexual Harassment of woman at workplace   (Prevention, prohibition, and Redressal) Act 2013, with regards to Complaints received and their Redressal for the year ended 31st December 2014.

Thanking You
Yours faithfully,
For

To the District Officer/Commissioner of Labour,
Government of Maharashtra, BKC Complex, Bandra,
Mumbai – 400 051.

Annual Report for the year……….. Under Section 21 of
Prevention of Sexual Harassment at the Workplace Act of 2013.

Nature of Action taken by the Employer: (See Annexure )

The following action was taken by the employer in respect of the complainants received during the year…..
No .of Complaints during the year investigated and completed by the Committee   …………