Following the impact of Covid-19, the government is looking to build and strengthen the state of the economy, setting in place several initiatives for incentive and relief. Among them is the recently announced Atmanirbhar Bharat Package 3.0.

The Atmanirbhar Bharat Rozgar Yojana takes inspirations from PMRPY that offered benefits to over 1.5 lac establishments. The current scheme is intended to offer more employment opportunities to aid recovery from COVID.

The Scheme will be applicable and operational till 30th June 2021.

Establishments desirous of obtaining benefits from this scheme must be registered with EPFO. Such establishments need to have:

(Note: The addition and base references are compared and estimated as in September 2020.)

All establishments registering with EPFO following the commencement of the Scheme are eligible to avail subsidy for all new employees.

Beneficiaries under this Scheme include:

The central government has committed to support eligible employees who have been engaged on or after 1.10.2020 for a period of two years. The subsidy allowed includes:

Work From Home - Do the Laws Need to Change?

Covid-19 has resulted in transformational changes to the workplace worldwide. Employees are encouraged to work from home, huge offices are largely empty operating with a minimum necessary workforce and many industries have let portions of their workforce go. While real estate and facility management businesses are struggling to stay relevant, organisations are struggling with health and safety issues as well as internet issues in home offices.

It is also clear now that this situation is going to last a lot longer than earlier assumed. Employers have realised that the expected drop in productivity has not materialised. Employees are enjoying the time saved on the commute and being more diligent. There is a loss in terms of collaborative ability but organisations are evolving quickly to adopt different technologies on this front.

In light of this, do labour laws in India need to change to incorporate and facilitate this unforeseen and rapid change? To answer this, we will look at the major areas where employment conditions are covered by the law and see whether anything needs to change

Definition of an establishment or factory or workplace - Yes ✅
As of now, the definitions are quite specific to places which carry on a trade or a business. This could be construed to exclude homes. This could get tricky in the case of any incidents at home. How would you distinguish between incidents which occurred in the process of work and household incidents? Would the Employee Compensation Act need to be amended to take work from home into account? This opens a can of worms and needs resolution.

Opening and Closing Hours - No ❌
As these pertain to the workplace and not the employee, there is no need for change here.

Working Hours - Maybe ❓
All states have defined the maximum number of hours of work, hours of overtime, interval periods and spread-over (start of work to end of work including intervals). Typically, these are handled through attendance systems/registers which clock your hours. In the transition to work from home, organisations will be challenged in terms of monitoring these. In environments where overtime is paid, this issue becomes even important. In the case of disputes, there is no longer any physical evidence on either side. While this is complicated, I do not see how a change in the law will make this any easier. This requires a technological solution on part of the employer.

Holidays and Leave – No ❌
While employers should resist the temptation to ask employees to work on off-days just because office is in the next room, yet again, this is an operational issue which cannot be ameliorated by the law.

Wages and Service Conditions – No ❌
Nothing in the employee-employer relationship changes on account of work from home.

Notices and Abstracts – No ❌
Most acts require that employees are able to access its provisions by requiring employers to put up an abstract on the notice board. Similarly, various notices are required informing the employees of minimum wages, holidays, service conditions and authorities whom they can approach. Employers need to find alternate ways of providing this information to employees.

Contract Labour - No ❌
As contract labour are employees of a contractor, and the act primarily governs the contractor-employer relationship, there is nothing that needs to change here. The vast majority of contract labour in India as covered under the act work on the site in any case, and there will be few cases of work from home here. While this list covers areas that already exist under the law, a few new areas of concern arise that may need addressing.

Health and Safety
Health and Safety for employees while working at home is a subject not covered at all by the labour laws. As mentioned in the first point, action needs to be taken to ensure that homes are included in the definition of workplaces. This will automatically ensure that any health and safety provisions that have to be followed in law will also have to be followed in the home workplace.
Further, group insurance policies which cover normal workplace incidents may not cover work from home issues. There needs to be some central policy making in this regard.

Work from home Infrastructure and Expenses
This is a big splotch of grey areas. Are employees required to use their personal internet connections and furniture for work purposes? What of employees with space constraints which make work from home impossible?

Employee Childcare
With children also having to stay at home during lockdowns, employees are having to balance work and life at a much more intense level. Employers need to be sensitive to this and the law needs to ensure that they are. 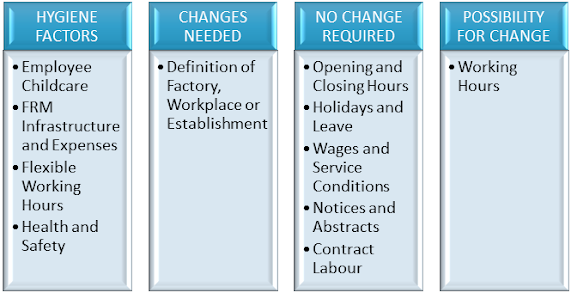 It is a standard refrain of Indian employers that labour laws hamper them from functioning with ease. This perception gains credibility because the laws originate from an aged British legacy system, and they do not change often.

Is this really the case? Is labour law in India restrictive to business functioning? Let us try to look at this subject analytically and see if we can reach some conclusions.

In order to make some sense of this issue, I have listed the main areas which employers complain about, provided my brief opinion on the issue and then assigned it a ‘Severity Rating’ on the following scale.

1. Ability to hire and fire freely:
If you employ more than 100 people (300 with the new labour code), you require the government’s permission to let people go. This is technically true but this applies only to ‘workmen’. If you are reading this and employed, the likelihood is that you can be fired without a problem. Countries where employers can ‘hire and fire’ have unemployment benefits in place. Further, there are no significant cases where permission is refused. This is at best a minor issue.
[Severity Rating: 2/5] 💣💣

2. Lack of Freedom to use Contract Labour/Outsource:
You are generally free to outsource except for a few jobs which are notified by the government as core activities. This list is not really restrictive. You do have to maintain records and comply with minimum wage regulations but that is true for all employees. The complaint is primarily from employers who wish to disguise permanent jobs as temporary. This is not a real issue.
[Severity Rating: 1/5] 💣

3. Multiple Trade Unions:
The law allows for multiple trade unions to be formed. This makes it hard for employers to reach agreements quickly. Newer industries and organisations with employee oriented HR policies are not affected by this issue. The number of trade unions has gone down from 40,000+ at the start of the century to less than 13,000 in 2014 as per last published figures. The influence of trade unionism in India is reducing. It does continue to prevail in the industrial belts. This is a major issue causing workers, employers and workplaces to suffer.
[Severity Rating: 4/5] 💣💣💣💣

4. Cost of Minimum Wages:
In the scale of gross minimum wages, India is ranked 107th among 122 countries by the ILO. These minimum wages are in any case applicable only in the formal employment sector. Thus this affects a maximum of 20% of India’s actual employment. The objection to this comes from the regular revisions which make it hard to predict costs at the lowest end of the pyramid. As auditors, we all too often see employers in this sector trying to game the system. In my opinion, this protection for employees is very important and is only a minor issue from an employer’s perspective.
[Severity Rating: 2/5] 💣💣

5. Harassment by the Inspectorate:
This used to be a big problem a decade or so ago when enforcement authorities had the freedom to harass you. Employer’s also had lax attitudes towards compliance. Nowadays, inspectors are no longer willing to turn a blind eye towards non-compliance. Employers are also much more inclined to aim for maximum compliance. The government has introduced automated procedures which schedule inspections randomly and prevent the authorities from being able to selectively target employers. This is, therefore, a problem for those who are trying to be non-compliant.
[Severity Rating: 1/5] 💣

6. Registrations and Licensing:
As India’s struggle to climb up the ‘Ease of doing business’ rankings shows, obtaining all the registrations and licenses required to start a business or an office is a thankless task. Labour laws are not spared from this mire. Again, things have improved thanks to technology, with application processes and statuses made available through portals but in most cases, you still need to visit the relevant office to obtain the certificate. To be fair, the documentary requirements for the registrations are not too stringent but given the physical difficulty in obtaining a licence and the unpredictability of the process with regard to time and results, this has to be a valid issue.
[Severity Rating: 3/5] 💣💣💣

7. State differences in laws:
“Under the Constitution of India, Labour is a subject in the Concurrent List where both the Central & State Governments are competent to enact legislation subject to certain matters being reserved for the Centre” The result of this? While most Acts (spirit of the law) are Central, most Rules (letter of the law) are different for each state. The primary act governing the running of all shops and establishments is also different for each state. This makes having consistent pan-India policies for working hours, overtime and leave impossible. This is a fairly severe and definitely a problem for organisations with establishments across the country.
[Severity Rating: 4/5] 💣💣💣💣

8. Administrative burden:
The number of forms and returns that need to be provided, and their frequency, can often be an irritant to employers. However, in this day and age of automation, this should hardly be a challenge. There are also complaints about the volume and relevance of the data required. It must be realised that the data provided in these returns are critical for labour and employment statistics. If you have managed to become GST compliant, nothing here should provide a challenge. Yet again, for those employers who aim to be compliant, this is not a problem. It is only when the data and the reality doesn’t match, that this becomes an issue.
[Severity Rating: 1/5] 💣

In summary, if we look at the severity ratings above, the total severity score is 18/40 or 45% with an average score of 2.25/5. Further, there are no issues that can be classed as burning issues, and just 2 classed as major issues.

CONCLUSION
While there are a couple of areas that need real and urgent changes, it is hard to conclude that Indian labour law is really restrictive. Employers enjoy substantial freedom albeit regulated. Employees enjoy protection of minimum wages, service conditions and retirement benefits but not full security in their jobs. I personally believe that the labour law environment in the country offers a fair balance between the needs of both employers and employees.